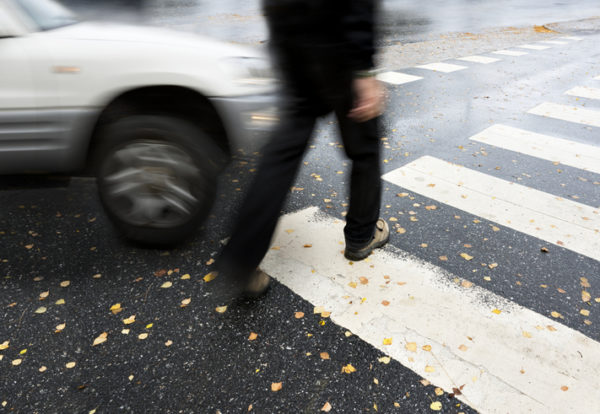 Turning SUVs pose a huge risk to pedestrians and bicyclists

SUVs, pickup trucks, and other large passenger vehicles cause more pedestrian accidents while turning at intersections, according to a recent study conducted by the Insurance Institute for Highway Safety (IIHS).

In Delaware and throughout the U.S., far too many people are severely injured or die in pedestrian accidents involving SUVs and other large motor vehicles, which is one reason why the IIHS is trying to raise awareness about the problem.

“We already know that larger vehicles cause more severe injuries when they strike pedestrians,” said IIHS Vice President of Research Jessica Cicchino, one of the study’s authors. “The link between these vehicle types and certain common pedestrian crashes points to another way that the increase in SUVs on the roads might be changing the crash picture.”

The statistics above were for vehicles turning left at intersections. However, pedestrians also faced a higher risk of being hit by an SUV or pickup truck turning right, the study found. In particular, pedestrian fatalities were 89 percent higher for pickup trucks and 63 percent higher for SUVs turning right compared to similar scenarios involving cars.

“It’s possible that the size, shape or location of the A-pillars that support the roof on either side of the windshield could make it harder for drivers of these larger vehicles to see crossing pedestrians when they are turning,” said IIHS Senior Transportation Engineer Wen Hu.

Researchers added that more work is necessary to better understand why SUVs and pickup trucks cause more pedestrian accidents. Regardless, it is the responsibility of every driver to watch out for pedestrians and avoid causing collisions.

How common are pedestrian accidents?

And even though there were fewer drivers on the road in 2020, pedestrian fatalities reached a record high of 6,500 deaths, an increase of 59 percent compared to 2009. In addition, 54,700 pedestrians were injured in car accidents in 2020, according to the NHTSA.

As for Delaware, roughly 22 to 24 percent of motor vehicle fatalities statewide involve pedestrian accidents, according to the Delaware Department of Transportation. That’s more than 27 pedestrian fatalities each year on average in Delaware during the past decade.

Pedestrian accidents often turn out to be complicated legal cases. Part of it has to do with the at-fault driver. In many cases, they'll deny doing anything wrong and try to shift the blame onto the victim. Other times, it’s the insurance company that’s the problem. Since they have a financial incentive to pay crash victims as little money as possible, insurance companies often do everything they can to minimize or even deny injury claims involving pedestrians.

That's not right. That's why if you were injured or a loved one died in a pedestrian accident in Delaware, you should talk to an attorney as soon as possible to go over your legal rights and options.

At the Law Office of Edward C. Gill, P.A., we can help you recover the compensation you're entitled to. We know how to investigate complicated cases, and we know what it takes to build winning cases in Delaware. Let us handle everything while you focus on healing.

To learn more about how we can help you, contact us today for a free consultation with an experienced Delaware pedestrian accident lawyer. Our office is located in Georgetown, and we handle injury claims throughout the state.